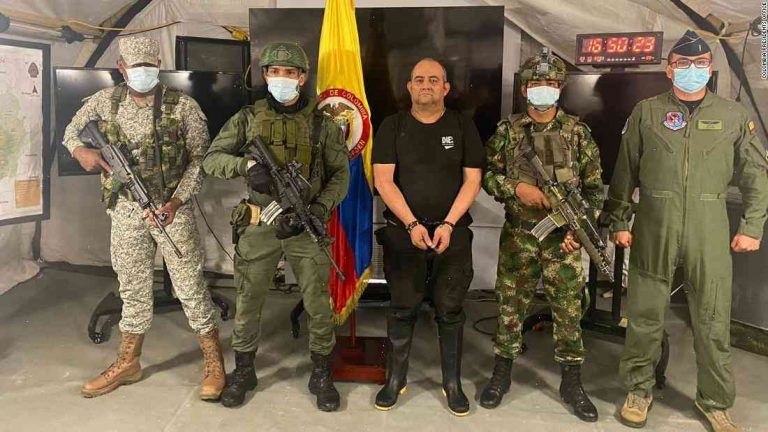 Colombia has arrested a member of its most-wanted drug cartel, captured their leader and seized their largest drug warehouse, authorities said.

Gen. Camilo Ramirez, the commander of Colombia’s National Police, told a news conference that Venezuelan authorities arrested Javier Antonio Calle Serna, known as “Otoniel,” on Wednesday. Ramirez said he was arrested because he was seeking to “change his ways.”

“I think that had I continued in this path, I would have been killed, and if I hadn’t died then I’d be killing myself at a time of my choosing,” he told reporters.

Ramirez said an investigation led authorities to Wednesday’s arrest in Venezuela of the suspected head of Colombia’s largest cartel, Ramirez said. He is the fifth man to be captured in the same investigation.

Colombia’s Prosecutor General’s Office said the man, who allegedly remains in Venezuela, led the cartel from his base there.

Ramirez did not give details about how or when the arrest was made.

The cartel is Colombia’s most violent, with suspected members blamed for killings, kidnappings and ransom demands that have ranged into the tens of millions of dollars.

Colombia’s chief prosecutor, Nestor Humberto Martinez, said in a statement: “Today there is a criminal tranquility in Colombia.”

The cartel is associated with the second-largest drug trafficker in the country, René Vargas Errejon, known as “Rene ‘La Cueva,’” who remains at large.

In Colombia, the leader of the Cali cartel, the late Daniel “El Loco” Barrera, was arrested in 2012 in Venezuela.

Others arrested by Venezuelan authorities include Rafael Catala, who allegedly headed the control of the drug trade in Caracas, and “El Matador,” who operated along the Caribbean coast and caused the deaths of hundreds.

The spokesman for the Venezuelan government’s Security Ministry, Efrain Antonio Campo, said: “I can give you a new message from the Commander-in-Chief of the Armed Forces, Colonel Francisco Yanez: Whoever is after peace and tranquility in Venezuela will find safe refuge here.”

Can you work later? I’m ashamed to admit I’m lazy