Recreation beckons at the opening of the 2019 Toledo Museum of Art Art Fair, despite a longtime art critic’s assessment that “less is more” — a not-so-subtle dig at the original 1955 Paris contemporary… 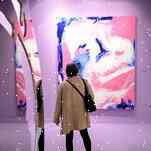 Recreation beckons at the opening of the 2019 Toledo Museum of Art Art Fair, despite a longtime art critic’s assessment that “less is more” — a not-so-subtle dig at the original 1955 Paris contemporary art fair, known as what was then known as the “Frieze,” that also was the premier venue for sales and business interaction.

In a professional arena, where the bottom line of auction houses and private collections often is a consistent barometer of success, the stakes are even higher at the gallery-only Toledo Art Fair, an event that is gaining impressive young collectors and investing public.

Founded and organized by students, professional buyers and dealers at the University of Toledo College of Visual and Performing Arts, the Fair offers two levels of accessible art and, in particular, Toledo’s art history, according to Virginia Hirtle, the Fair’s director and founder.

“This is one of the largest art fairs in the region and, increasingly, we’re seeing it grow in popularity,” she says.

Toledo’s “art history,” including restoration work on cultural artifacts and the museum’s works of art, “gives our fair a unique quality in presenting artwork that is artworks that have been touched, studied, listened to and appreciated,” Hirtle says.

When exhibitors went on a global search last fall for the exhibition program, one stipulation was “they were not allowed to bring existing art from Toledo,” she says. “We had to convince them it was necessary for them to bring art from somewhere else — to show what else is out there.”

The regional shows were led by the team at Relativity, which provided a curated roster of artists who each had a Toledo connection. The artists included Larry Baca, who’s a native of Toledo, and Adrian Lake, who studied there in college and now has a gallery in Atlanta; each is a highly regarded artist.

Scott Maranto, who has been working in fine art for 27 years, has been involved in the Fair for the past 20 years, since it was still known as the Expo.

“The Toledo Art Fair has grown into a powerful and vital art platform and a design addition to the Toledo community,” he says.

Among the highlights of the four-day event will be a preview of video work by David Schaefer, a longtime Toledo-area resident, whose works center on the interaction between image and subject, unlike his visual influences, including coffee-table art deco sculpture, architectural photography and the prismatic quality of outdoor light.

Additional information on the Toledo Art Fair and discounts are available at the Fair’s website, toledoartfair.com.

This article was written by Cassandra Cotton, an editorial assistant with Hearst Newspapers.