Ruben de Jesus B., who was stabbed to death on Aug. 11, 2017, in a market parking lot at the Lekki toll gate, Lagos, Nigeria, was waiting for information about why his life was… 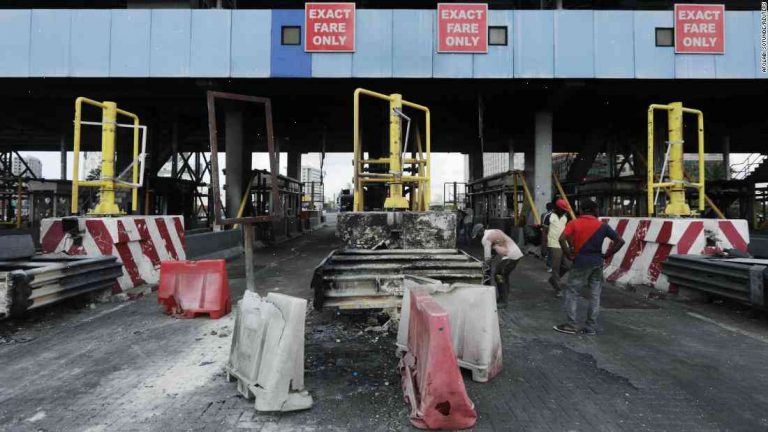 Ruben de Jesus B., who was stabbed to death on Aug. 11, 2017, in a market parking lot at the Lekki toll gate, Lagos, Nigeria, was waiting for information about why his life was cut short.

Like many motorists at the toll gate on Sept. 21, 2017, Ruben waited an hour and 15 minutes with his car, his cellphone, and his cheque for 40,000 naira ($150) to do a vehicle inspection before going to register with the Nigeria Customs Service. It is common for truck drivers to wait for the inspection before registering. He was soon told his cheque would be processed in an hour, Ruben’s parents said. He waited for eight hours, two of which were spent screaming into the night.

Around 11 p.m., a convoy of vehicles stopped in front of Ruben’s truck, like the government had done to slow it down. A man in a hoodie forced Ruben to the floor with a chair. A second man with a rifle approached, tugged on Ruben’s hair, and shot him in the back. Ruben’s brother Peter cried out, and a security guard wrestled with the second man. The first man then returned with a knife and stabbed Ruben a second time, after which he pulled the trigger but the weapon jammed.

The man who had killed Ruben, Emmanuel Adebowale, had been detained by the Lagos State police in October 2017 for allegedly assaulting a woman, according to an article published in The News Magazine, a weekly publication in Lagos. The Lagos State police granted Adebowale bail, but Adebowale was arrested again by the Nigeria Customs Service in December 2017 for allegedly trying to extort money from a truck driver.

After Ruben’s death, his parents launched an urgent appeal to President Muhammadu Buhari for an investigation. They asked the presidency and the authorities to bring Adebowale to justice for Ruben’s death. The truth of Ruben’s death would give family peace and confidence in the Nigerian justice system, they thought. They believed the federal police would investigate the incident, and that the defendant, Adebowale, would be tried on the grounds of murder.

But instead of justice, Ruben’s parents received silence and impunity.

A senior executive at First Bank Nigeria, Ruben’s bank account where he was withdrawing money from, could not provide the slain driver’s account number. “My father spoke to the Nigerian police and told them there is no money for Adebowale,” Ruben’s mother said. “They told my father he should not worry.”

Today, Ruben’s mother, Celestine, says she still cannot comprehend what happened. She can’t reconcile the fact that Ruben was a 43-year-old good-looking man who had a strong marriage, and that she lost him to a thief, who also stole her son’s life savings. Ruben is from Bassey, a town in Oil Rivers State in the Niger Delta. In 2011, Ruben was married and had three children.

“He was trying to save money for his children,” Ruben’s mother said.

She did not know that the assassin’s car was a Subaru. Ruben’s young children would find their father dead at the foot of their beds. “They would cry day and night,” Ruben’s mother said. “They would eat roti on bed, which my son would have made for them in the morning,” she said.

His son Carlos, then 12, witnessed the killing and called his mother from school the next day.

“Ruben died in my arms,” the son said. “I felt bad because I called my mother all the time. I was more distraught about Ruben’s death than my sister, because she saw the aftermath in the news.”