Written by Alaa Saleh, CNN Israeli officials accused Palestinian rights groups of “terrorism” Wednesday after each of the six signatories to the Boycott, Divestment and Sanctions (BDS) Campaign’s national charter — the oldest and… 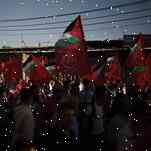 Israeli officials accused Palestinian rights groups of “terrorism” Wednesday after each of the six signatories to the Boycott, Divestment and Sanctions (BDS) Campaign’s national charter — the oldest and largest of which had been signed long before the original campaign’s launch in 2005 — was named in an Israeli court filing.

The filing comes after Israeli officials attacked those who had signed the BDS national charter as anti-Semitic and treasonous in July, accusing the movement of endangering humanity. In the same filing, the Israel Justice Ministry announced that it had begun the process of taking legal action against pro-Palestinian groups and individuals in the U.S. and Europe.

According to a report Tuesday by investigative news website The Intercept, the filing accuses the six BDS signatories of illegally using money donated to civil society groups to fund Islamist militant groups Hamas and Islamic Jihad — or Front de Libération de l’Homme (FLM) and the Popular Front for the Liberation of Palestine (PFLP) respectively.

According to a similar Intercept report published in May, Israeli prosecutors sent a letter to six BDS signatories requesting they hand over details of any funds they received in 2017 from pro-Israel groups or individuals in the U.S. under the jurisdiction of the Jewish Agency, which has a long history of links to the Nazi genocidal extermination of European Jews.

The move sparked anger in the U.S. and Europe, prompting concerns about a politicized and illegitimate legal investigation.

In the current filing, the Israeli state cites three examples in particular to argue that the respective national human rights groups contravened their national commitments by working with Hamas and Islamic Jihad.

“In the national charter of the Popular Front for the Liberation of Palestine, FLM and PFLP declare that they are committed to Palestine’s liberation via a struggle, that is, a struggle against Israel, its defeat, disestablishment and elimination and to struggle against its replacement by a regime, a government, or state under the rule of the Palestinian Arab nation… This is calculated support for terrorism by a terrorist organization and its subversive agenda,” the filing states.

“Considering that FLM is an established, long-established, foreign-funded political entity, whose national flags are used by Hamas and the PFLP in recognition of its national and political legitimacy and that FLM has participated in various confabs and events that are associated with Israel, this is terrorism,” the filing concludes.

Since 2005, all six groups have published their national boards of directors in their websites and publications, and none of the groups were indicted on charges of “terrorism” and none of the groups threatened to leave the BDS movement. Instead, the groups pointed out that the nature of the coalition was a model that they could benefit from and that they were doing their best to minimize their political impact.

‘SNL’ takes another jabs at Trump in Ellen DeGeneres’ return