By Brian Klaas FoxNews.com Correspondent- On the one hand there is Prime Minister Emmanuel Macron’s world-class world expo – fully funded with hundreds of millions of euro’s of EU’s taxpayers’ money. On the other… 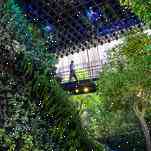 On the one hand there is Prime Minister Emmanuel Macron’s world-class world expo – fully funded with hundreds of millions of euro’s of EU’s taxpayers’ money. On the other hand there are people like Luxembourgish scholar, Frédéric Gregoire, convinced that Macron’s world expo, the 2017 first edition of which was an international embarrassment, is a bridge too far.

Let’s start with the “expo” itself. Macron wrote in a 19 June speech at Paris University announcing the October opening of the second exposition. “From 20th October, the second world exposition will open… this is an opportunity to hold a true world exposition,” he wrote. “It is necessary for all of us who are independent Europeans, from our presidents, to Parliament, politicians, world’s business leaders, religious figures, etc. to pursue the goal of this world expo.”

But the first edition last year in Genoa, Italy, turned into a major embarrassment for the organizers. Its problems started with inept management. Many of the anticipated large numbers of tourists to attend the exposition never showed up. Over 100,000 workers had to work extra hours to try to make up for the shortfall in attendance. Emergency rescue workers were needed for the roof collapses, which endangered the lives of thousands of attendees. For example, hundreds of thousands of spectators were unable to enter the military museum which was designed to house a portion of the exposition.

The expo didn’t help improve Italy’s image abroad, including among NATO. The initial march through the streets from the former Expo’s venue through the streets of Genoa was marred by violence. The Roman imperial city spent more than 20 million euros’ of public money to host the expo. And many Italian politicians complained the expo had no-strings attached, other than the risk of the public money for the Italian government.

When discussing the impropriety of such expenses, Mr. Macron’s office responded by saying the construction costs had already been incurred, with 80% of the expo’s operating budget already spent before the expo’s opening, and that there had been no cost overruns. The example of the world exposition “was already built into the whole project,” a spokesperson for the French presidency said.

“Expo” has instead become known as “Impotente.”

There were mounting concerns over security as violence erupted in Italy and France in the days leading up to the expo’s opening. In France, customs officials couldn’t board a yacht, which had tickets for VIPs and foreign diplomats, that was carrying Mr. Macron to the location. The boat was forced to return to Paris.

After premier interrupted the opening ceremonies to suspend the count of stars along with his chief of staff Laurent Fabius to protest the way the city of Genoa conducted the inauguration, criticism was piled on him both inside and outside France.

And, like the first edition, the grand opening was marred by violence on the street in Genoa itself.

To his credit, Macron did the smart thing and canceled the grand opening of the expo. The second edition will now occur between 18 and 25 October in the town of Pau, France.

And, of course, the first “expo” was designed to boost interest and make the use of the ports and airports in Genoa in particular, more efficient.

Professor Gregoire who recently delivered a lecture on the topic of a world expo to the French national conference of parliamentarians from other countries in Paris, was among the many disappointed by last year’s first world expo.

Gregoire tells me he believes, “It’s not possible anymore to have a European Union common market or a European Parliament based on the old structure. This last first expo lacked thinking. It was based on fluff: it was allowed to have rock stars on the opening, promoters on the floors and it was fake. It was like everything else that comes out of the EU today. It was only a quick call. But it was the biggest project a European project in its history. And I cannot like it anymore.”