At the start of a crisis like this, expecting leaders to do anything other than close their minds is probably naive. There is no question of a moderate hold on their countries – at… 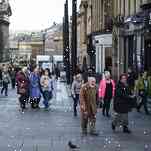 At the start of a crisis like this, expecting leaders to do anything other than close their minds is probably naive. There is no question of a moderate hold on their countries – at least as the UK is concerned – remaining in the European Union. In the short term, I do not expect major moves of any kind on either side. Although for some, that could prove to be a real problem.

With the London stock market having just tumbled to its lowest point in nine months, the City is staring across a dark abyss.

That great British institution, the pound, has made a 5.7 percent decline since my previous column in mid-July – on a historic scale, the worst such fall against the dollar since Black Wednesday and the second worst against the euro since October 1992.

For an outsider, this is a similar scenario, or worse, to what happened over the course of the eighteen months leading up to Black Wednesday. I cannot remember another time when the British were seen as such significant sellers of their own currency, or banks running short on liquidity.

Yet, all the doom mongers this time around seem rather too adamant. I can see their case for the invasion of Iraq which we did in 2003, the collapse of the pound 18 months after that and the UK’s long exposure to Russia over the last twenty years, and the collapse of sterling. They, however, seem oblivious to this new British fragility.

Of course, it is sometimes said that it is easier to predict the future than it is to see how it unfolds. But it’s extremely difficult for a country which is not part of the major international trade group, the WTO, to make predictions.

Put another way, the major developed economies are democracies, and so it will only be those who are directly exposed to the domestic economy that will know the true state of their position before it is way too late. The rest of us are left wondering – for example, what the impact of President Trump’s intention to impose tariffs on steel and aluminum imports from the European Union would have on the ailing British economy and I am not at all optimistic about the truthfulness of my fears.

So in a sense, the British election is back. It happened, but we did not quite know what it meant. It seems clear that once again the result is leaving me with no answer. I made a significant bet early on regarding the Brexit effect on sterling and it seems to have just about paid off. Now I have again bet on sterling which has paid off. I had predicted a little bit of a downturn, but an orderly one and then – as events developed – a further decline that would last between 9 and 12 months. All that was said and done seems a total waste of time now.

I am not even sure what the correct answer now is. Yes, it has been a debacle for Britain, the EU, and Donald Trump, but there is little wonder that many have been losing all hope. There are very few countries on earth that could take the kind of risk which the United Kingdom has taken.

As that famous bard Henry IV once said, “In the six hundred years which men have lived on this planet we have often cared too much, and looked too little, and acted too much and been too little.” Sadly, with Brexit, we have learned that lesson very badly.

Peter Hitchens (@LordHitz) is the Daily Mail’s columnist and a commentator on politics, the arts and current affairs.