The world’s biggest oil companies lobbied heavily last year to slash climate change goals and to speed up oil, gas and coal projects, even as their profits slumped and governments committed to reduce greenhouse… 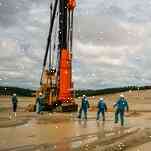 The world’s biggest oil companies lobbied heavily last year to slash climate change goals and to speed up oil, gas and coal projects, even as their profits slumped and governments committed to reduce greenhouse gas emissions, according to a U.N. report published Monday.

The businesses also failed to act quickly enough to cut methane leaks that cause more climate-changing pollution than any other by lowering their leakage rates by a third by 2030, the report said.

U.N. scientists said the non-binding pledges were too weak and that the companies had missed opportunities to secure wide-ranging commitments to lower emissions, which governments around the world have pledged to phase out in coming decades.

“They have chosen to continue to focus on profits rather than risks, locking in the next 35 years of dependence on fossil fuels, and undermining their commitment to climate action,” said Prof. Ronan Blagojevic, a professor of climate change at Cambridge University, one of the nine researchers who published the report in the journal Nature Climate Change.

Shell Chief Executive Ben van Beurden said the economics of oil remained attractive, despite the company paying $25 billion for British rival BG Group last year. “If you look across the world we have extremely competitive returns,” he said in an interview.

Last year, oil majors spent $19 billion on share buybacks, a 25 percent increase from 2017, and only $2.5 billion on reduced emissions of climate-changing gases.

Companies have also missed the opportunity to limit methane leaks to 40 percent of the gas produced from sources such as well completions and leaks from processing plants and pipelines. The study said that model, which is consistent with existing technology, would keep a third of gas under the ground, which could reduce climate emissions by a further 10 percent.

Methane leaks are responsible for about 30 percent of the Earth’s heat-trapping methane emissions. Methane contributes more than 90 percent of global warming from natural gas, coal and oil sources.

Companies said they have started to develop leak-resistant well designs and were investing in more leak detection and repair tools. They said they were working on plans to reduce emissions from well completions and pipeline leaks.

Still, oil majors and other companies have been putting too much focus on short-term stock prices, the scientists said.