On Wednesday, S. Todd Lamkin, the president of the New York State Fraternal Order of Police, called for people who work in law enforcement to be vaccinated against the H1N1 virus. In a letter… 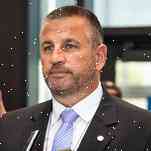 On Wednesday, S. Todd Lamkin, the president of the New York State Fraternal Order of Police, called for people who work in law enforcement to be vaccinated against the H1N1 virus. In a letter obtained by In These Times, Lamkin echoed the sentiment of Gov. Andrew M. Cuomo, who said in an October 21 letter that pregnant women, young children and health-care workers should be vaccinated.

“For the safety of those who are taking an oath to protect the rights and liberties of all New Yorkers, it is imperative that you, your spouse, partner, and those close to you, receive this disease-fighting protection now,” Lamkin wrote.

In a separate letter to NYPD Commissioner James P. O’Neill, Lamkin reminded him of a 2003 message from then-NYPD Commissioner Bernard J. Kerik warning officers to get vaccinated against the virus. But Lamkin noted that following Kerik’s death, no one in the department was vaccinated.

“It has been 13 years since your predecessor issued a letter to the entire department reminding officers and others to receive H1N1 vaccinations,” Lamkin said in his letter. “Unfortunately, no officer was vaccinated in the interim. We encourage you to strongly consider how these vaccinations can help protect you and those who work with you in the various departments.”

“As the commissioner, you should have protected the profession,” Lamkin wrote. “But you can do it again.”

In the past, O’Neill has stressed that he does not want to “ridicule” the requirement, and then “have someone come in and start shooting at us.”