Trump administration has suspended its travel ban on African countries 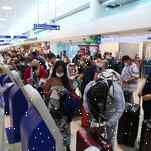 UPDATE: The Trump administration says in a statement that it has lifted the ban for Americans traveling to and from predominantly Muslim countries.

WASHINGTON – The Trump administration is announcing on Monday that it will lift a ban on travel to the United States for citizens of countries in Africa, the Middle East and South America. The change comes following a massive global lobbying campaign led by numerous U.S. and international business, civic and religious organizations.

“The United States must maintain the ability to protect its people from terrorism, and travelers from the most dangerous countries must still face vigorous screening and potential risks,” Homeland Security Secretary Kirstjen Nielsen wrote in a statement. “But in these extraordinary circumstances – when we are fighting terrorists and violent extremists on several fronts, when flights are being suspended from several key countries, and when we have identified specific and effective counter-measures against the travel of terrorists to the United States – I believe we can lift this restriction.”

The news comes in response to a nationwide protest movement that began immediately after President Donald Trump’s June travel ban targeting people from certain countries. The original order prompted protests and political backlash at airports across the country in the weeks that followed.

Since then, the government has revised that order to reflect new concerns about terrorism. It was announced on the 100th day of the Trump administration.

The ban affects residents of Sudan, Libya, Syria, Iran, Yemen and Somalia. Travelers from those countries were barred from entering the U.S. for 90 days or until their respective governments overhauled their terrorist watch lists to meet U.S. security standards. They were also barred from U.S. soil for an additional 90 days, making them subject to indefinite detention or a “vetting hold” of 90 days.

“No nation is immune from the threat of terrorism,” Nielsen said. “For decades, America has provided strong, effective support for regional partners fighting terrorism. But our assistance relies on our ability to verify the identity of travelers from the most dangerous countries, and the burden of that verification must be shared.”

The ban has been lifted for citizens of those countries traveling in government-owned, government-leased or -chartered aircraft to the U.S.

Americans and permanent residents from the affected countries will now be allowed to enter the country, as long as they provide evidence that they have been properly vetted, and pose no security threat.

Those people must also provide a valid government-issued document that establishes their identity, says the new rules. Foreigners must also be subject to the ban if they have been convicted of, or charged with, a crime that violates U.S. or international law or is related to terrorism. There are exceptions for certain students, diplomats and holders of U.S. green cards, which are temporary residency cards issued to permanent residents. Those travellers do not need to provide security credentials, as long as they pose no threat.

Blacks in the digital space: A groundbreaking Blacktag program debuts in July