In 1921 Sherlock Holmes co-creator Arthur Conan Doyle published a novel called The Lost World. Famous for its Dastardly Young Gentleman protagonist, Graham Brown, it told a story that centred on the sinking of… 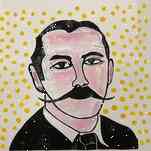 In 1921 Sherlock Holmes co-creator Arthur Conan Doyle published a novel called The Lost World. Famous for its Dastardly Young Gentleman protagonist, Graham Brown, it told a story that centred on the sinking of the British cruiser HMS Chiswick. This second in his World series, possibly based on his experience working on HMS Gove, was recast as a Lewis Carroll-esque tale of love lost between two distressed lovers. The book was a bestseller, and it was this audience that prepared Graham’s fictional equivalent of Watson and Holmes to plot and solve a world-changing incident.

We will never know exactly what happened on board HMS Desire, but the book – with its rose-tinted picture of Singapore – is no longer a mystery; its brilliant depiction of the energy of the city-state’s people draws comparisons to 1869’s Kipling Story of the Green Bird. In fact, today’s creative characterisation of Singaporeans is in danger of latching on to local stereotypes, making them inaccessible to non-Singaporeans. The book, meanwhile, can only benefit from telling an original story, in the best traditions of its hero. Graham’s description of Singapore as a “bright green wonderland”, a “pleasantly peaceful wonderland, a pleasant verdant wonderland … and an undemanding wonderland” is hugely evocative. The book is packed with Watson-style “What’s that, again?” moments, too, where the Dastardly Young Gentleman – whose verbal abuse of Julia is so perfunctory as to be satirical – speaks directly to the reader through his uncanny abilities to supply details of the scene to us.