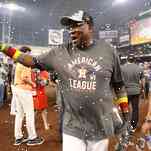 Written by by By Laura Hitt, for CNN

On Thursday night, Dusty Baker appeared to be the star of a new football movie.

Or maybe “the” star of the new football movie. As in Baker, the manager of the Houston Astros. On a night when he’d just lost one of the biggest baseball games of his career, Baker was the one explaining his team’s puzzling defeat to the New York Yankees.

The manager was what the media seemed most interested in discussing, more than anything else. The third base umpire, who was suspended for the final game because he had ruled the Astros out twice with runners on third base in the ninth inning, had not made it to the dugout before it was over. He declined to comment on what happened. The catcher said he wouldn’t say anything to reporters either. The star player asked not to be mentioned.

Baker, though, was one of the few, not to mention the only, people talking.

After Houston’s 5-3 defeat in Game 6 of the World Series, he openly berated himself as he stood at the foul line — looking more of a pop singer than a baseball manager — holding the trophy while he couldn’t give the ball to his other trophy. He was lost, shocked by an incredible finish to an amazing series.

This week, after Houston beat the Los Angeles Dodgers in the first round of the World Series, Baker was silent in the dugout as the Dodgers tied the game with a little over two minutes left. The manager appears not to have known there would be extra innings. “God, I’m so disappointed,” he said, running out of answers. He emerged from the dugout and — when Dodgers second baseman Brian Dozier drove in the winning run with a single — the emotion started flowing.

Perhaps Baker was just losing his mind — he’s 75, after all. Or perhaps he was losing his mind but not letting the moment get to him. Either way, if we ever found a manager worth rooting for, Dusty Baker is it.